As a family, we have particular documents that are associated with my great-grandfather, Frederick Walter Beacock so in this research blog post, I have put them to good use. Interestingly, we actually have more documents and information about him than I have found on any family history website.

Frederick Walter was born in about July 1899 in Hartlepool, County Durham to Frederick and Florence Avis Beacock (nee Smith), who were both from Hull. Our family are unsure why the family moved to 71 Stephen Street in Hartlepool, but it was most probably due to the occupation of Frederick Beacock (Frederick Walter’s father). There may have been more work for him there, as he was a General Carter/Rullyman. There also seems to be a few other Beacocks in the area at around the same time. I actually have these in my family tree too, as they are cousins of the Beacocks in my direct line.

One document that I cannot seem to find is a baptism record for Frederick Walter. With the family moving from Hull to Hartlepool and back to Hull again, I am unsure of where about’s he was baptised. I need to visit the Hull History Centre and also the Beverley Record Office, as they may be able to help.

On the marriage certificate, it states that Lily was living at 5 Frances Buildings, North Street, at the time of her marriage. Frederick’s sister, Frances, lived at 6 Frances Buildings at the time of her marriage in 1916. One of my theories is that Lily and Frederick met when Frederick was visiting his sister. On the marriage certificate, it also shows that Frederick was living at 70 North Street, so he and Lily were definitely living in the same area. Obviously, I cannot know for certain but, I believe it is a very strong possibility and seems to much of a coincidence! 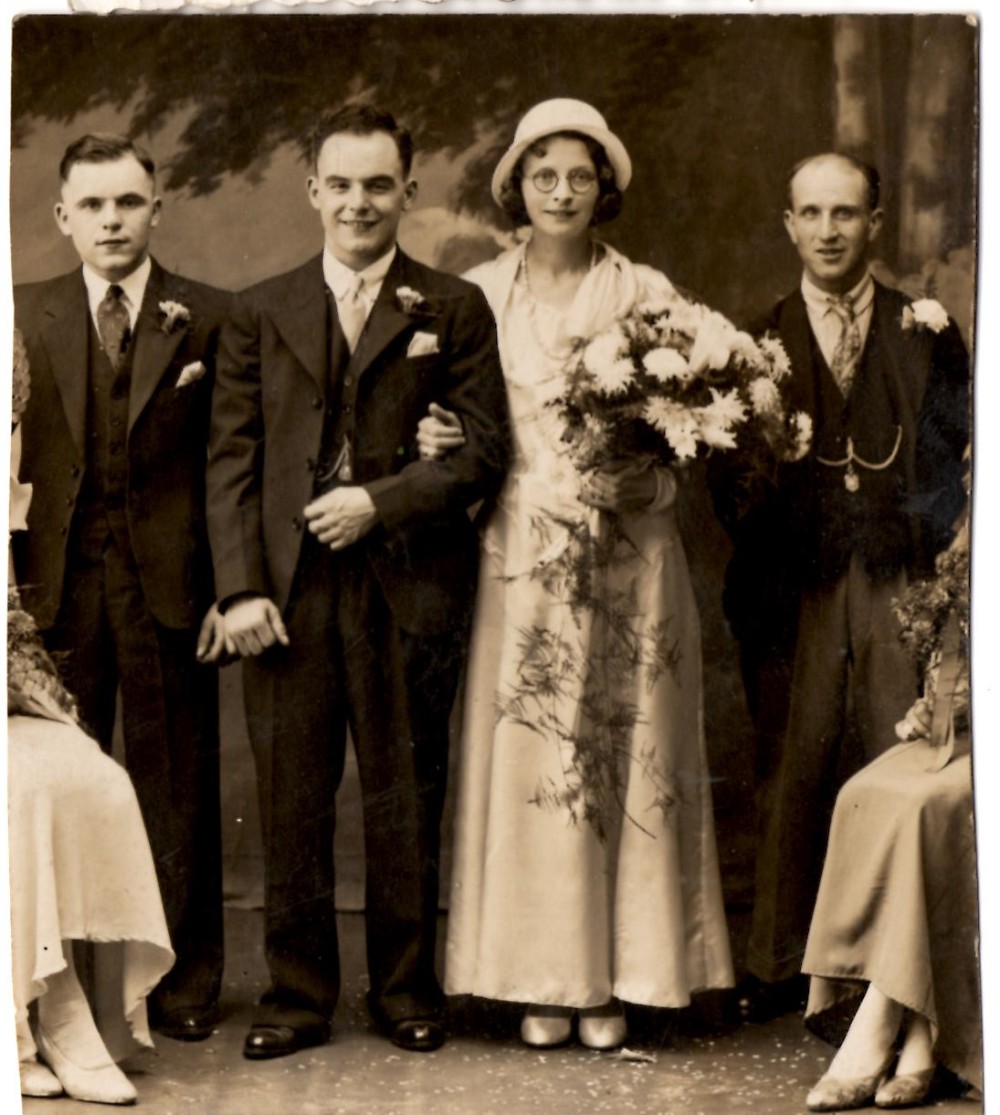 According to various family members, Frederick Walter wasn’t very pleasant to his wife Lily and their children. He would often be at the local pubs, getting drunk, spending all of his wages and chatting up women. He would often hit Lily and the children too. My father’s cousin said that his father, who was Fred’s youngest son, had told him that he and his sister Sylvia would run and hide under the bed whenever Fred came home. He would drag them out and hit them with a belt.

One time Fred was in one of the pubs near where they lived. He was womanising as usual and Lily, his wife had had enough. She walked to the pub with her children and said to Fred something along the lines of “It’s your turn to look after the children now”, and she left them there with him.

Fred would on many occasions cheat on his wife Lily. An example of this was when he was working at Ideal Standard in Hull. He was apparently fired from his job because he had been sleeping with the bosses wife.

Apparently, Fred had left Lily and gone to live with another woman. We do not know when this happened, but it was apparently just before his death. We also do not know who the other woman was.

On 7th April 1938, a letter (as seen below) was sent to my great-grandmother Lily at 13 Gibson Street in Hull, informing her that Frederick Walter, her husband was dangerously ill. Just 2 days later, Frederick Walter passed away in Anlaby Road Hospital in Hull. 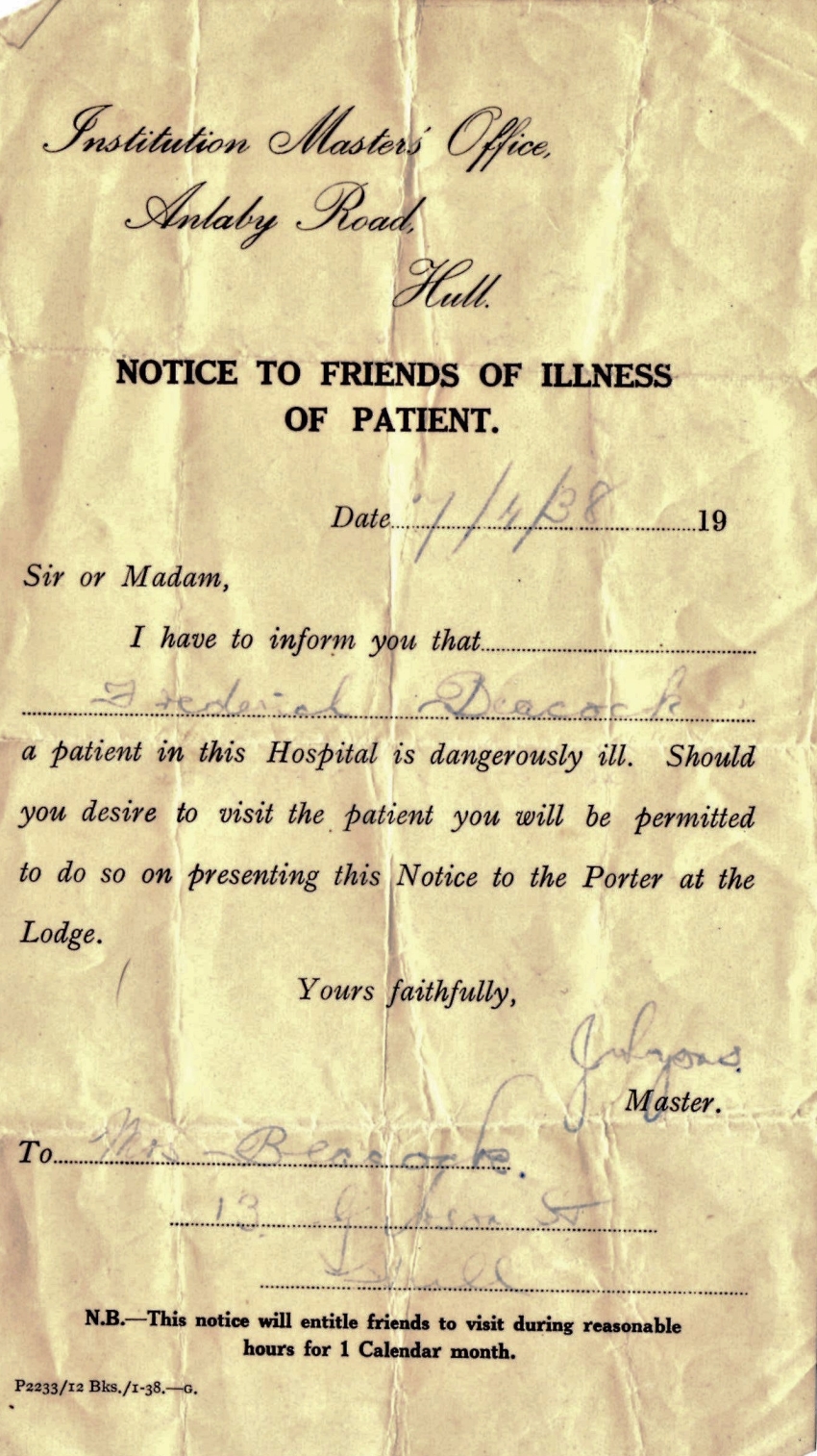 I had heard from family members that Frederick Walter had died from a brain tumour, but I attended Northern Cemetery in Hull, where I was able to search through the old burial records. There was a cause of death which said Tuberculosis. I purchased a copy of his Death Certificate and that states that the cause of death was Chronic Pulmonary Tuberculosis.

I found two obituaries in the Hull Daily Mail Frederick Walter; one of which was published on 11th April 1938. It is as follows:

Frederick Walter’s funeral was held on 13th April 1938 and was conducted by Reverend Gardiner. He was buried in Northern Cemetery but without a gravestone. Here is the funeral booklet that was given out to the people who attended. Luckily this has been looked after by a few generations of my family and has now been scanned into my laptop. 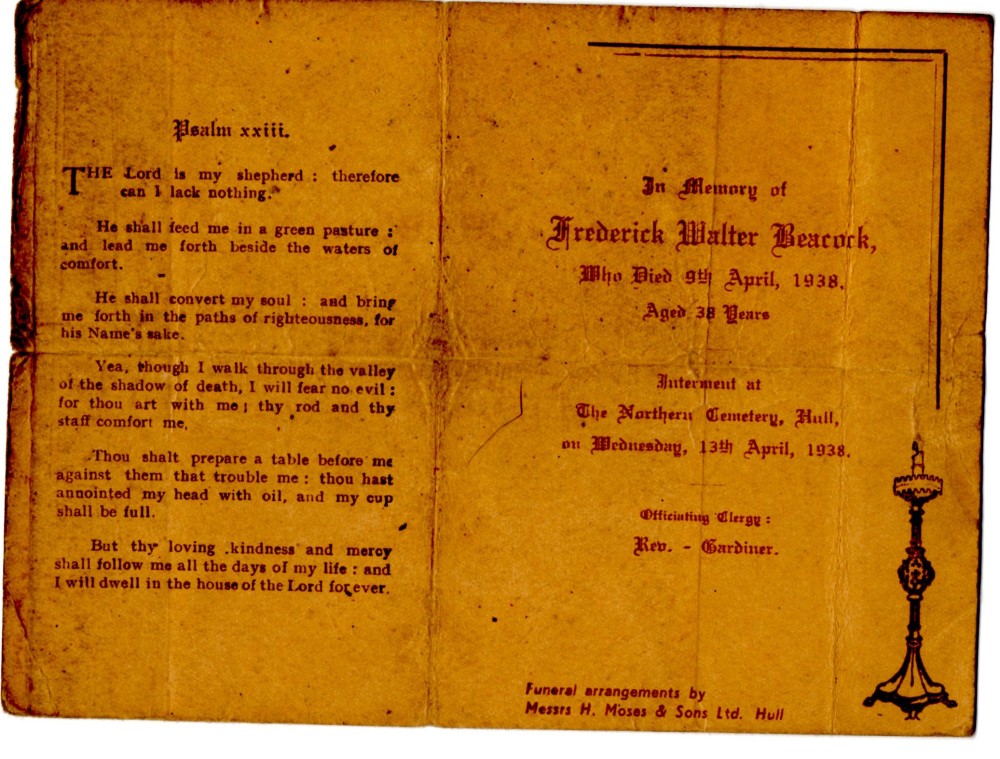 There is still a lot more research to be done about my great-grandfather, Frederick Walter Beacock, but this is to come in future blog posts and updates. I will keep you posted on anything else I find, but for now, I am moving onto someone else…

Thank you for reading,
Tony.