Henry Hunter married Mary Ann Wright on 17th May 1899 in Burton Pidsea, East Yorkshire. The marriage record below shows that Henry was a Labourer, just like his father, John. Mary Ann did not have an occupation and her father was a Carrier. If you look in the bottom left-hand corner of the image, one can see the signatures of Henry and Mary Ann. I really enjoy seeing the handwriting of my ancestors because I like to see whether or not they are similar to mine.

In the 1901 census, Henry is recorded as an “Ordinary Agricultural Labourer”. This would have involved working on a farm throughout the whole year – a full-time job. An average wage of an agricultural labourer in 1901 would have been 14s 11d per week. 10 years before this, in 1891, Henry is recorded as being a Farm Servant. He was 1 of 5 farm servants for Farmer John Drewery in Hilston. This was a very common job for men under 25 years old. At this time Henry was 19.

I have included the two photographs below, in order to show how Henry and Mary Ann aged through the years. The photograph below and to the left shows Henry, Mary Ann and I believe that the boy is either John (Jack) or Ronnie Hunter, their sons. 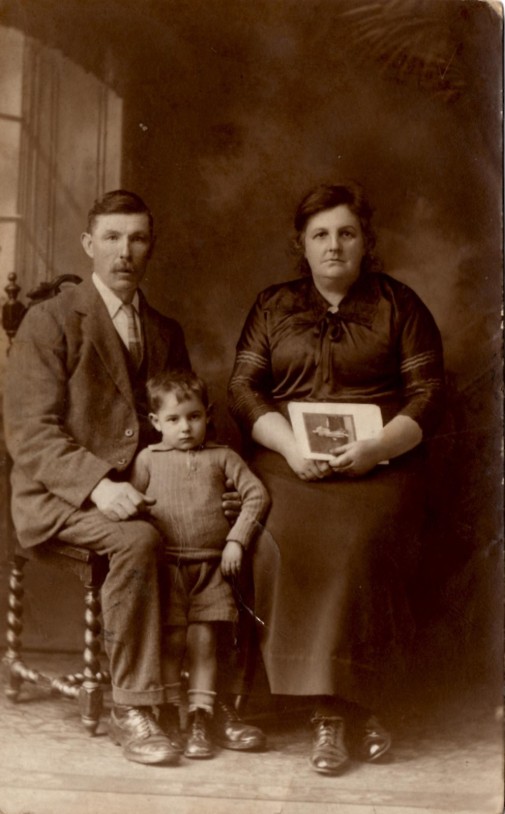 In the Hull Daily Mail on 26th November 1903, Henry was summoned for assault. I have included the newspaper article below.

In 1911, Henry does not seem to be written on the actual census record itself but is written on the individual household cover. There is a blank row at the top of the census record, where Henry’s name and details should be, but they are not. Mary Ann has filled in the census and has signed it herself. I have included a section of the census record below. For a reason which is unknown to me, the family seem to live in Hull at this point in time. I do not know whether or not it was something to do with Henry working away.

On the 1939 Register, Henry is recorded as a “Retired Sewerage Pump”. I suppose this occupation speaks for itself. Henry would have worked with the sewage system, probably making sure that there were no blockages etc.

The photo below shows Henry and Mary Ann in their later life. Even at an older age, the couple still made an effort to look presentable and smart. There are no more details about this photo, but it was most probably taken in and around the Hedon area.

Henry was apparently a man of few words, meaning that he was quiet and didn’t really have a lot to say. My grandmother’s cousin, Doug, told me that Henry chewed tobacco and had a spitoon that he would spit the tobacco into. Doug told me that he remembered being quite excited when his grandad did this, as he would never miss!

I have heard from my great uncle that Henry was also quite a big drinker. He would often frequent a well known Hedon pub called The Queen’s Head.

Henry’s son Tom Hunter was the caretaker of the Hedon Men’s Recreational Club. There were two snooker tables in there; one upstairs and one downstairs. The club had no licence for alcoholic drinks, so they would only sell soft drinks, such as homemade lemonade. Inside, under the window that looked onto the main street of Hedon, was a bench. Henry had his own spot on this bench, right next to the door. One story is that a local man came in and dropped his cigarette on the floor. As the cigarette was rolling along the floor, Henry, who was sat in his spot, spat his chewing tobacco at it – hitting it and putting it out!

My great uncle told me that Henry was quite a lazy man and “never knew a days work”. When Henry and his family lived in the Courtyard House at the back of the club house, Henry used to breed pigs. There were two small stable-like buildings there, which is where the pigs would have been kept. He used to sell them to make a living.

Henry sadly passed away on 19th August 1950 in his Hedon home of Courtyard House. He is said to have been sitting in his chair with a cup of tea and a newspaper when he passed away silently.

Henry was buried on 23rd August 1950 in Hedon Cemetery, but there is no headstone. I am currently trying to find out the exact plot so that I can put a marker there. It is sad that there is no headstone because I really hate the idea that someone, who has lived a life of their own, becomes forgotten.

Thank you very much for reading,
Tony.